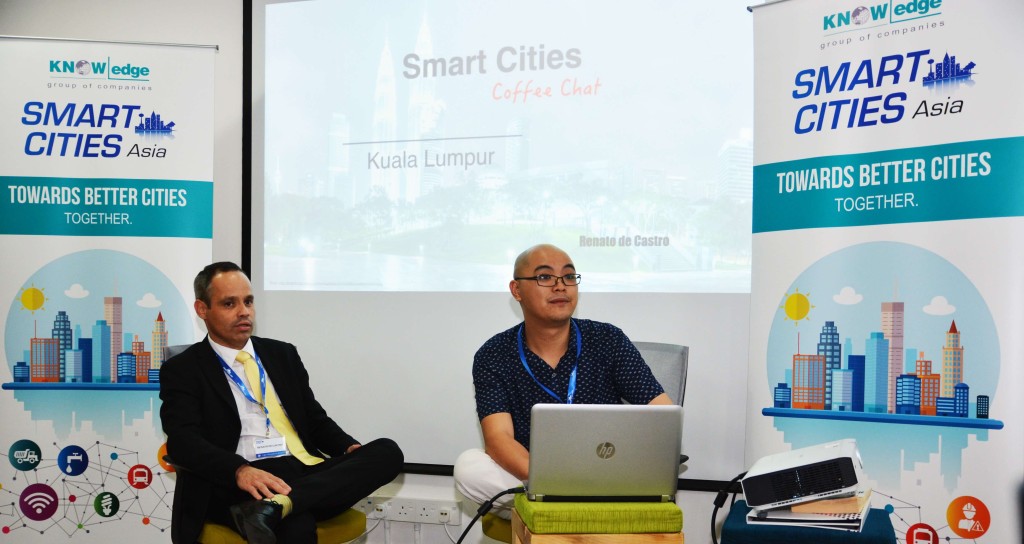 In conjunction with Earth Day on the 22nd of April 2016, we had the pleasure of inviting Dr. Renato De Castro to share his views on Smart Cities with us. It was a pretty vibrant mix of crowd coming from the government linked entities, business communities and even the local communities as well. We had representatives from the Economic Planning Unit under the Prime Ministers Department, MDeC, MCMC, Selangor Government and various other organisations as well.

I’d like to also take this opportunity to thank The Kuala Lumpur Centre for Sustainable Innovation for generously offering the space for us to have this discussion for free.

There were some fascinating insights and smart city trends coming out from the discussion, as it was a two-hours long session I will endeavour to summarize the discussion without diluting the findings as much as I can. In the interest of keeping the article concise I will highlight three findings from the Smart Cities Coffee Chat.

To quote some statistics that is known to many of us, according to the World Bank 75% of Malaysian’s currently live in cities and in less than 50 years time 90% of us will either migrate or be born into the city. Dr. Renato shared some interesting statistics on the urban growth per hour, as example he shared that in New Delhi the urban growth rate is at 79 people per hour, which is more than 1 person per minute.

Locally, our urban growth rate is at 4% on average annually. Ironically, while about speaking the urban growth rate a member of the audience who was initially supposed to join us was unable to make it because his wife was delivering a baby girl.

It is clear that this rapid urbanization will put a strain on Malaysian cities’ resources, when asked about how we can deal with this issue, Dr. Renato mentioned that despite the innovations in technology cities will reach a point where it can no longer sustain its’ own growth and argued for the necessity for Smart Villages to cope with this issue.

“It’s just physics, you cannot put two bodies in the same place. I think we should balance the number of people living in the city and the migration from rural areas”

Dr Renato mentioned the importance of creating rural areas that are as equally attractive to live in with comparable quality of life standards.

Dr Renato argues that when designing a smart city plan, governments and town councils often focus too much on coming up with the budget or securing the funding, he said governments should instead create a framework for Public Private People Partnership.

He then went on to share an interesting example in New York called LinkNyc, where the city gives out high-speed WiFi to its citizens by replacing thousands of dilapidated pay-phone kiosks with WiFi hotspots. Typically an implementation of this nature could easily cost cities millions if not billions of dollars. However using the PPPP framework, the city of New York was able to provide this high-speed WiFi to its citizens at zero cost to the city and it’ll be funded through advertisements. In fact not only will cost nothing to the city of New York, it will generate half a billion USD for the city! This is an especially interesting example since, ubiquitous internet connection has always be seen as one of the building blocks to a smart city and if often executed to little success due to high costs or low internet speed. [clear]

Another interesting example that was brought up by Dr. Renato was a partnership between Waze and his hometown of Rio de Janeiro made in 2013 prior to its acquisition by Google.

A member of the Selangor Government who was present at the event also shared on the government’s partnership which was announced one day before the event.

The partnership is still at its very early stages, the first issue the government is focusing on is potholes, where users of Waze can lodge complains on potholes and it’ll be automatically redirected to the relevant authorities to act upon the complain. The specific KPIs are still being developed but initial discussions suggested that the potholes will have to be fixed within 5-7 days. Six municipal councils, namely of Ampang Jaya (MPAJ), Kajang (MPKJ), Subang Jaya (MPSJ), Shah Alam (MBSA), Petaling Jaya (MBPJ) and Klang (MPK) will be involved with the project that may begin as early as the middle of this year.

The key take away here is that cities need to be more innovative in coming up with ways they can work with private companies and citizens to solve urban issues. We need to re-think the way we fund smart cities project and instead of coming up with massive budgets, cities should consider possible synergies and win-win situations that can be established through a PPPP framework.

Disruption of Mass Transportation & The Future of Mobility

Dr Renato, spoke about Hyperloop as an example of disruption of  mass transportation. Hyperloop’s conceptual high-speed transportation system originally put forward by entrepreneur Elon Musk, incorporating reduced-pressure tubes in which pressurized capsules ride on an air cushion driven by linear induction motors and air compressors. What that whole bunch of jargons really means is a mode of transportation that is capable of travelling at roughly 1,300 km/h. To put that into context, it’ll take you roughly 16 minutes to travel from Kuala Lumpur to Singapore. That’s faster than most of us take to travel to work!

According to a conversation between Dr Renato and CEO of Hyperloop, they already have a test site in the Middle East with funding from angel investors of 300 million USD!

Only 1.7 people are transported each year with cars. The car is responsible for more than 20% of Co2 generated in the world and we take 50 sqm each car in urban areas. 80% of the time the car is parked!”

He argues that in the context of driverless cars, a car-sharing model is far more efficient, especially if it’s based on the UberPool model where several passengers share one car. It’s not difficult to imagine where he is coming from considering the fact that 80% the time the car is not utilized.

In the later part the of discussion a member of the audience brought up an interesting perspective about the ethical considerations of a driverless cars. He posed the question of how should we mathematically quantify the value of a life. In a scenario whereby the driverless car is unable to manoeuvre to safety and somebody has to die, how does it decide?

Should it kill someone based on who is perceived to be of higher value to society? What if the calculations determines that the driver is of the least value, will society be comfortable with that fact? Perhaps the driverless car should calculate the course of action that is the least likely to cause death? Doing so also opens a whole different can of worms. If the algorithm is designed as such, in a scenario where you have a cyclist wearing a helmet vs a cyclist who’s not wearing a helmet the driverless car will likely hit the person wearing a helmet. Are we then penalizing people for being safe?

Either way, it breaks the first law Isaac Asimov’s Law of Robotics which is “A robot may not injure a human being or, through inaction, allow a human being to come to harm.” Obviously there were no conclusive answer from the discussion, but it’s important for us to realize that we as society need to ask ourselves these questions as we move forward to the future.

All in all it was pretty fruitful session, though we scheduled for the Smart Cities Coffee Chat to be 1 hour long everyone was so engaged with the discussion that before we knew it, two hours have passed. While it is great for us to pursue smart cities, we must also recognize that every city possess its own charms and characteristics, or as one of the members of the audience coined it; a DNA. In our pursuit it is important for us preserve and respect the DNA that defines our cities. Moving forward our Malaysian cities must play on our strengths and harness our cultural diversity and heritage towards creating a unique smart city that’s like no other.

We’re hoping to run these community events once every month, these events are a non-profit initiative of Knowledge Group to spark conversations around the area of  Smart Cities – conversations which I hope that will serve as a catalyst to action and it’ll lead up to our main annual Smart Cities Asia Conference & Exhibition  where we’ll be presenting our findings on how to improve the city to the local councils, central governments and industry players.

Stay updated on our latest community gatherings through our Facebook Group here https://www.facebook.com/groups/smartcitieskl/